Samson: The Accidental Witness
Part 6 0f 6
Written by Bob Dudley on Apr. 8, 2021
Instead of looking at the comic book version of Samson, let's look at the real man and see what we can learn. This will be a long blog. So, I am going to break it up into several installments.
How does this relate to us? Turn to Acts 1:8
Now, why did we go over the whole story of Samson's life? It wasn't to show he is not the hero we were taught that he was. However, he is NOT a very good role model. So, how DOES this relate to us?
Look at Acts 1:8, "But ye shall receive power, after that the Holy Ghost is come upon you: and ye shall be witnesses unto me both in Jerusalem, and in all Judaea, and in Samaria, and unto the uttermost part of the earth."
What does Acts 1:8 tell us about our supernatural power and our mission?
Samson was given the filling of the Holy Spirit. We were given the Holy Spirit when we got saved and the ability to call on that Spirit for power whenever we want to. Samson had a specific mission for God - he shall begin to deliver Israel out of the hand of the Philistines (Judges 13:5).
Acts 1:8 tells us our mission for God. And let me just say right here, that mission IS NOT being a pastor, teacher, deacon, Sunday school teacher, song leader or any other important job in the church. Our Mission is WINNING THE LOST FOR JESUS - PERIOD!!!!
Samson had gifts (his strength) to accomplish God’s plan. We are given gifts (the gifts of the Holy Spirit – intellect, money, talent, strength, teaching) to accomplish God’s mission for us. Sampson did not use the gifts God gave him for God’s purpose.
Are we doing the same? If someone walked up to you and said, "how did you use the gifts you were given and the supernatural power of the Holy Spirit yesterday?" Would you be able to say you used it to talk to someone about the love of God and that Jesus paid the price so they can go to heaven?
Final Thoughts
I’m challenging you to recognize that God gave you a promise. The promise that the Holy Spirit lives inside of you and is there to help you do God’s mission of saving the lost.
Sampson (and other saints of the Old Testament) could not depend on being filled with the Holy Spirit continuously. But, we can depend on the Holy Spirit 24/7. An aside about the filling of the Holy Spirit, it is not a special feeling. Sampson did not realize it was gone. Thus, there is no special feeling when we are filled with the Spirit. This means you must simply have faith that, as you step out of your comfort zone to tell someone about Jesus, that the Spirit will be there to give you utterance and boldness to tell the gospel.
Realize you have the promise of the Holy Spirit to be God's witness today. Are you being a Sampson and being focused on yourself? I want to challenge you to have enough faith that if you do the work that God has assigned you (fulfilling the Great Commission) the Holy Spirit which resides in you will fill you and give you the supernatural power you need to do great things for God.
Are you going to be an accidental witness or are you going to do it on purpose?
Bob's Blog
Come to this page when you want to see what is on Bob's mind. And, every once in awhile, other guest writers. It'll always be informative!
Check back every few days to see blogs about
- running a God honoring company
- success testimonies
- effective marketing and sales
- and much, much more !!!
FREE e-Book: God's Partner 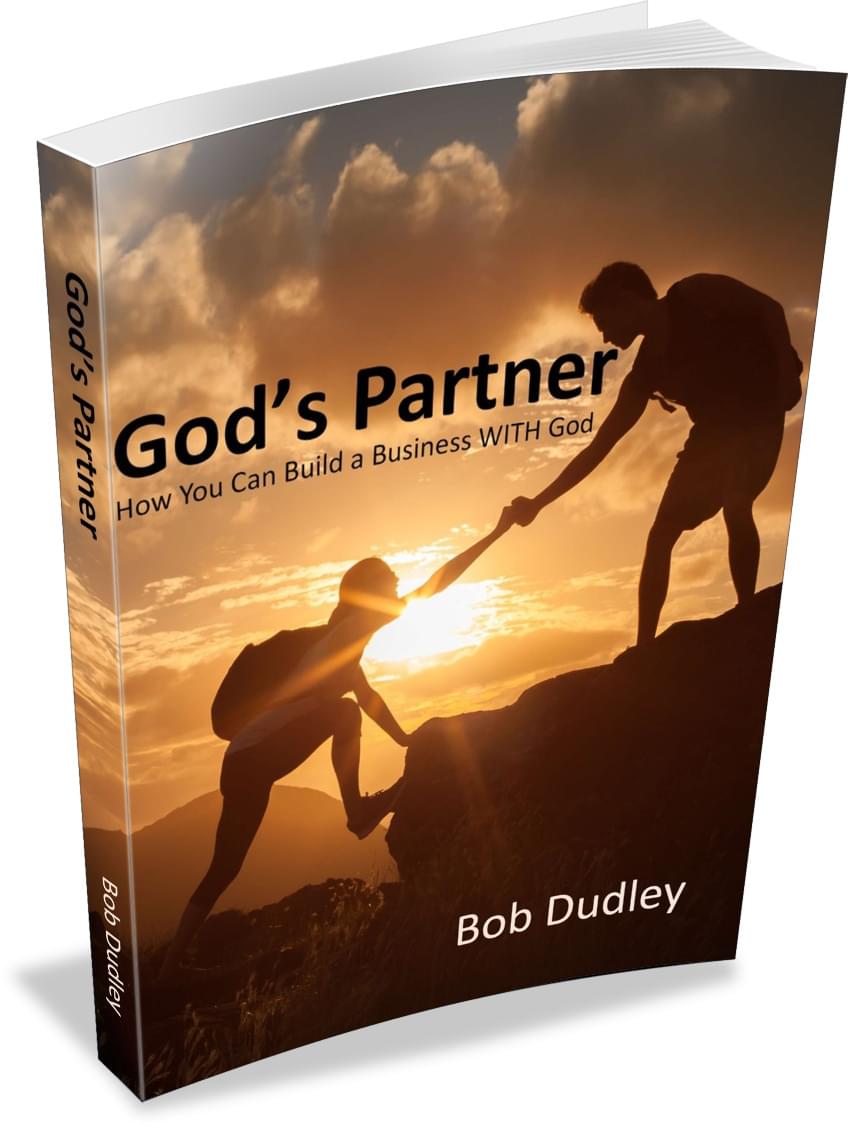 Make sure you get your FREE copy of God's Partner: How You Can Build a Business WITH God.

Here’s the thing, the guys (and, yes, its mostly men I see sharing this) quoting this, in my humble opinion, are engaging in macho chest pounding.
In my book, “7 PERFECT Steps to Success,” I talk about something I call the Success Curve. There is a place on that curve (called Educated Pessimism) where every entrepreneur on the planet experiences Entrepreneurial Depression. This is a place where you start to find out everything you don’t know out running your particular business and it can be crushing. Some entrepreneurs feel this so intense they actually contemplate suicide.
So, yeah, it is totally ok to seek encouragement. As a matter of fact, as a Christian, it is expected. God is infinitely relational and He absolutely expects us to do this as a team and not as a lone wolf.
So, What is it About Fear, Anyway?
Written by Bob Dudley on Feb. 12, 2021
Have you ever gone to a motivational speaker and they told you that you must face your fears in order to be successful? Well, I'd like to talk about that for a minute or two.
There's an old saying that goes, "Every problem looks like a nail when all you have is a hammer." I see this play out a lot with the current crop of motivational speakers. You may have heard some of these speaker say things like:
You have to overcome your biggest fear to succeed.
Success is on the other side of your fears.
To succeed, you MUST get out of your comfort zone.
Sure, there are times you have to face a fear to get to where you want to be. But, that is so not the case every  time. There is certainly no requirement to conquer ALL your fears to be a success. As a matter of fact, I think fears can be placed in three categories.
Fears you want to keep. If you have a fear of placing your hand into a roaring fire, yeah, I'd hold on to that fear.
Fears that don't matter. If you live in Colorado and you have a fear of sharks eating you when you get in the ocean, well, so what. It just doesn't matter.
Fears you have to deal with. Now, there are a few fears you might have to content with. If your sales process requires a strategy session on the phone and you have a phobia about talking on the phone, you'll have to deal with this fear. But, even here, you may not have to "overcome" the dear. Off the top of my head I can think of three options:
1. You can actually overcome your fear of talking on the phone.
2. You can hire someone else to d the strategy sessions (even Batman had Robin).
3. You can change your sales funnel to eliminate talking on the phone.
Bottom line, sure, you may have to deal with a fear or two as you pursue the dream God laid on your heart. But, don't fight fears just for the sake of fighting them. There will be enough obstacles in your way without creating your own.